It’s not his fault, upon further investigation I found that certain legal writings are lousy with the term.

Here is the paragraph that started me on this investigation: 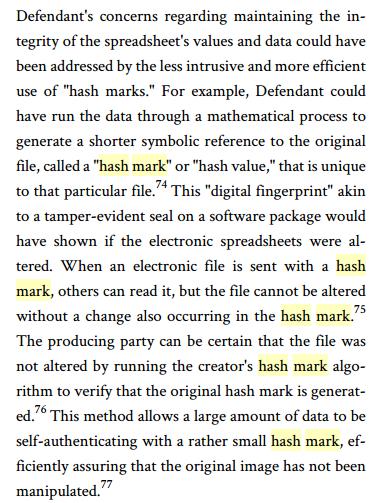 In Williams v Sprint Judge Waxse cites an article from 1999: 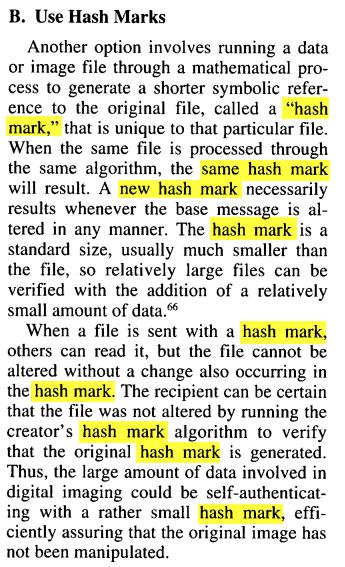 Harts’ article was written in 1999. Perhaps the vernacular has changed since then. However, Ralph Losey used “hash mark” in 2007 in his paper Hash: The New Bates Stamp.

In this example Losey uses the phrase of his own accord but perhaps he got it from one of the two sources he cites:

U.S. District Court for the District of Maryland, Suggested Protocol for Discovery of Electronically Stored Information and Williams v. Sprint/United (same that I quote above). 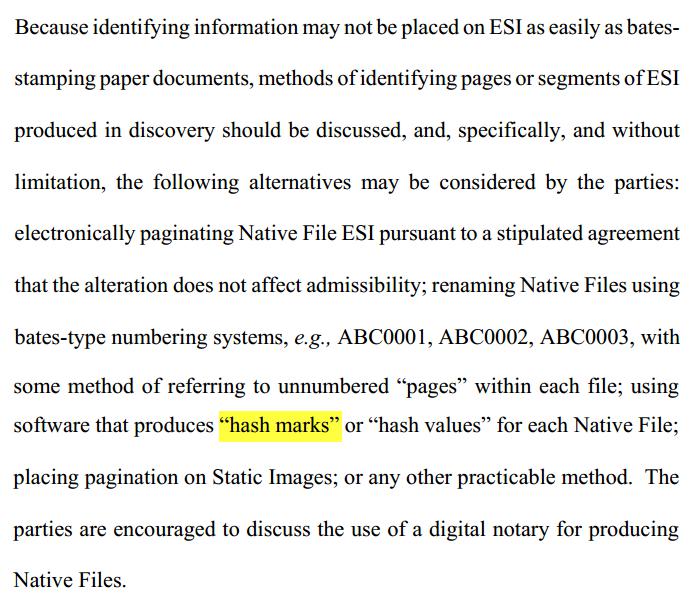 U.S. District Court for the District of Maryland, Suggested Protocol for Discovery of Electronically Stored Information

Then I find a book, written in 2009 that quotes Sprint but does not independently use “hash mark.” Discovery Problems and Their Solutions By Paul W. Grimm, Charles S. Fax, Paul Mark Sandler. Grimm et al also tell us to look at Losey’s paper. 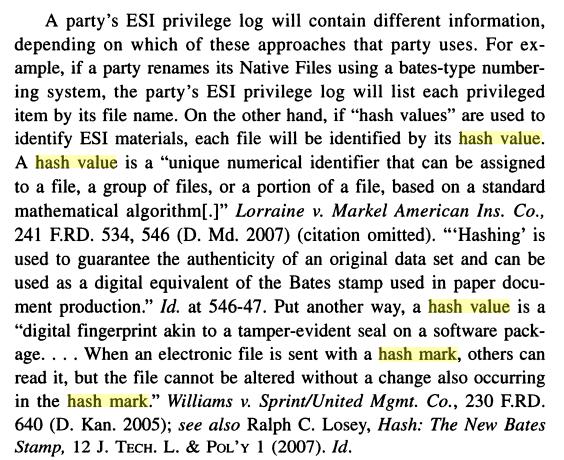 In Lorraine v. Markel Am. Ins. Co. (PWG-06-1893, at 25-26 (D. Md. May 4, 2007)) Judge Grimm says that “one method of authenticating electronic evidence under Rule 901(b)(4) is the use of ‘hash values’ or ‘hash marks’ when making documents.” Not surprising Judge Grimm cites Williams v Sprint. (He also cites Managing Discovery of Electronic Information: A Pocket Guide for Judges but that guide does not refer to hash marks.)

There are a few books which provide a glossary with the following:

Hash: An algorithm that creates a value to verify duplicate electronic documents. A hash mark serves as a digital thumbprint.

This definition of hash mark appears to have originated with RenewData’s glossary (in 2005) and was referenced on edrm.net where it got picked up. RenewData later started using this definition:

Hash: an algorithm that creates a value to verify duplicate electronic documents. A hash value serves as a digital thumbprint.

Do you see what they did there?

What are hash marks? Really? # is a hash mark. As in shift + 3 on your keyboard. A hash mark is not the same thing as a hash value.

A New York Times article also refers to hash value as a hash mark but that seems to be an isolated instance.

A search for “cryptographic hash mark” yields results that are all related to the subject of this NYT article.

In short, “hash mark” is not an appropriate substitution for “hash value” but because a paper written by a law student in 1999 referred to the hash mark the term has become embedded in the vernacular of our times.